I’ve been asked to release this class a couple of times ever since it’s been showcased in Shows, but I was always hesitant due to its strong dependancies on the API wrapper classes. I mean, the class was a mess. So I rolled up my sleeves and decided to clean it, but most importantly, stripe away its dependencies. 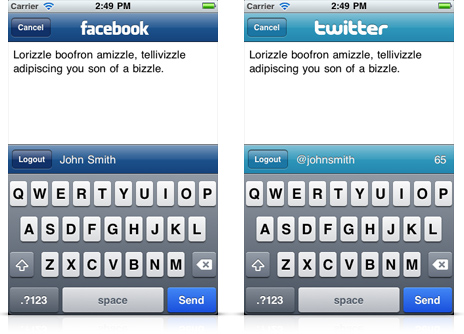 SVShareViewController is a simple compose UI for posting textual content to 3rd party services like Facebook and Twitter. It doesn’t include the network classes that will make the actual API calls. For that, you’ll have to work with the Facebook iOS SDK and MGTwitterEngine. The Readme file includes rough walkthroughs of how they should interact with SVShareViewController.

That being said, the class includes a delegate protocol, which will allow you to write your own implementation of the “send” and “logout” actions:

Interacting with 3rd parties always seems to be more difficult than it should be. I hope SVShareViewController makes it easier for you.