These are a couple side projects I had while working on Shows and Transit. Initially “weekend projects” (aka “this will be done by Monday” — LOL), I ended up spending a ridiculous amount of time on them. In both cases, I never settled on a satisfying design. Their respective missions also don’t appeal much to me anymore, so here: closure.

I was mad at Ego for not getting updated with new widgets. I remember when I got on Dribbble, I really wanted it in there (2 years later, it still isn’t).

The idea was to make “The New Ego”, that would quickly have your profile stats from various services at hand, but also statistics about particular items within these services. For instance Dribbble shots, GitHub repositories, recent StackOverflow questions, etc. The app would use “recipes” so support for new services could be added remotely, without the need for an app update. Consume by Bjango does this. 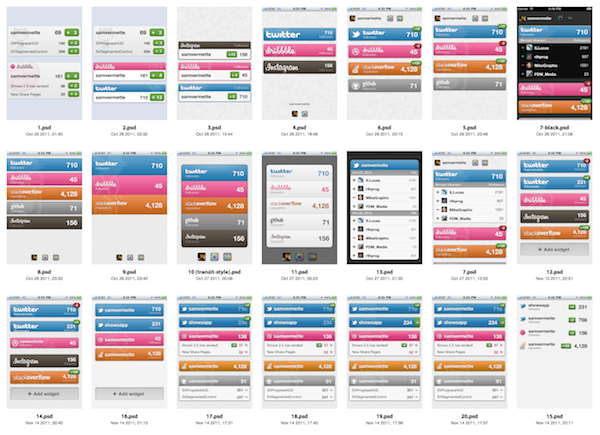 About a year ago, I ditched Google Analytics for Gauges, which has its own (simplistic but well done) app. I haven’t used Ego since, so it stopped itching. That being said, I hope someone takes this on someday.

I use Birdbrain ever since I got on Twitter. I thought it could look better, but also be more focussed on followers (isn’t that why everyone’s launching it anyway?).

So I started designing Followers. For a very long time, I played around with user avatars. I liked to think that the app didn’t have a UI — the UI was the content itself. I spent a ridiculous amount of time tuning scrolling performance so that it scrolled like butter on iPad (266 avatars at once!). It also allows you to search through your followers (using name, location, bio, etc) — something I wish I had at hand on many occasions. 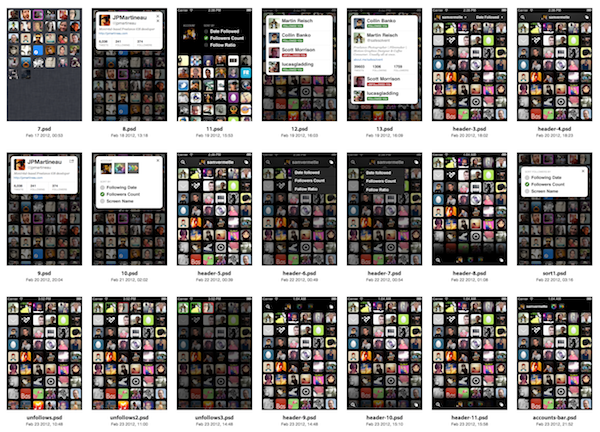 Towards the very end (was using it daily and beta 1 was almost there), friends helped me realize that although the grid design looked nice, it communicated too little information. So I started working on a list view, which ended up communicating too much information. While finding middle grounds, I started using BirdBrain again. Maybe it’s because I spent too much time on Followers, but my hard feelings towards Birdbrain are gone now.