Pulling the Plug on Shows

The sad day has come that I officially resign from developing Shows, my music concert app.

Shows was my first utility app that I pushed to the App Store almost 4 years ago. It has evolved from a very rough, default-UI-looking app into a fully custom design that taught me countless things about design and programming. 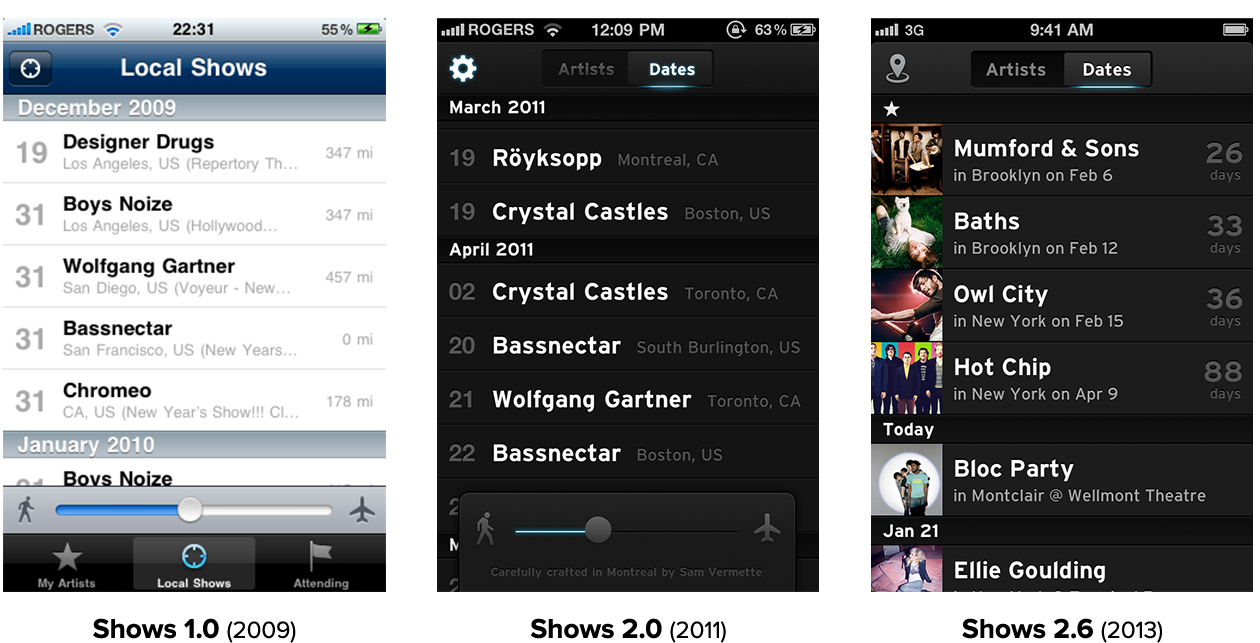 Shows is what got me into pixel-snapping. It was my take on the dark UI theme I've had in the back of my head for so long. It made me learn Ruby on Rails, and experience my first server outages. I went to my first WWDC UI feedback lab with it in 2011. It brought me invaluable recognition of my work as a freelance developer and designer. I simply wouldn't be where I am today without Shows.

But it's time to close the loop. My passion for live music slowly faded away in the past year, to the point where I am no longer excited to work on Shows. My interest has instead shifted towards urbanism; to how cities are laid out and how people move through them. That's initially what got me started on Transit two years ago, and it's now what gets me up in the morning (that's right, I said morning). For me to focus entirely on Transit, getting rid of Shows is the right thing to do.

I used to think all it took for an app to take off was good design, and that word of mouth and design-sensitive bloggers would take care of the rest. Turns out this only works for a few days. Because marketing your app as an indie dev has never been harder than it is today. Ironically, building one has never been easier.

It might come as a surprise to some that Shows never was a profitable business. In the 4 years of sporadically building, developing and maintaining it, total app revenue has been of $12,700, most of which I did through a very short period of time. All in all, Shows has brought me an average revenue of $264/month. Considering the amount of time I spent on it, let's just say I used to make more money cooking chicken.

Nowadays Shows is downloaded barely once a day. With reason, as I haven't updated the app in over 6 months.

With iOS 7 just around the corner, Shows is begging for a complete UI redesign and some long-overdue CoreData bug fixes. But for all the reasons I previously mentioned, I don't see myself working on these before a long while.

Today, I'm taking down Shows from the App Store. I'll also be shutting down the server backend completely in a few weeks, as an API change in iOS 7 is causing nasty bugs with device authentication.

To everyone who continue to rely on it, I apologize.

To everyone who supported me along the way, through feedback, bug reports, localization, app store reviews or blog posts, you helped Shows live through the years and made it a better product. I cannot thank you enough for it.

Now, this is the part where I would recommend a good alternative to live up to. Sadly, I have yet to find one. There are many concert apps out there but none seems to fit my bill. To whoever's going to build the next great concert app, here are my thoughts following 4 years of developing a concert app: